For many following world news today, Dominica remains an unfamiliar name, a cruise ship port of call perhaps, an obscure destination on a treasure map dotted with numerous island pearls.

Those in the know have called Dominica—a nation often confused with the Dominican Republic— the Caribbean’s best kept secret. A place of volcanic peaks cloaked in the Lesser Antilles’s most biodiverse rainforest, the island’s rugged terrain and lack of white sand beaches have precluded the development of the crowded beach resorts and hotel high rises that have spoiled the true nature of less forbidding Caribbean isles. Twenty-nine miles long and sixteen miles wide, Dominica is blessed with abundant rainfall, countless waterfalls, clear flowing rivers.  The last Carib Indians, the Kalinago, still call the island home. They say that Dominica  is the only Caribbean island that Christopher Columbus would still recognize today—at least until Maria arrived.

Today, nearly four weeks after impact, the full extent of Dominica’s suffering– the damage to its infrastructure and ecology, the loss of human life, and the enormous task of rebuilding ahead—has yet to be calculated. News of Dominica has dropped quickly from sight in a season of spectacular catastrophes elsewhere. Hurricanes Harvey and Irma. North Korean missile launches. The Mexican earthquake. Mass murder in Las Vegas.  California wildfires.

The morning after Maria made landfall, island Facebook pages went quiet, their photos of yesterday’s Eden frozen in time. Updates were slow coming in, but within a day or two, news of the island’s total devastation began to reach the outside world. Thirty people had been killed outright, with many more missing or cruelly injured. Residents had emerged  from their hiding places at dawn to confront an unimaginable new reality that barely resembled the life they had known just hours ago.

The ICU unit at the hospital at the capital of Roseau was without power, its backup generators flooded. The streets of every town and village were awash in mud, deep in wreckage, and tangled with masses of downed power lines, snapped trees, smashed vehicles. Food, water, and medical supplies were running short. I was shocked to see news helicopter footage of Dominica’s once-verdant mountains looking winter-brown and napalmed, vacuumed of all greenery. Huge rafts of broken forest trees had washed down the raging rivers to the sea, trees not only stripped of leaves, but also of bark by the power of the storm.

That morning, Dominican Prime Minister Roosevelt Skerrit composed a distressing SOS that began with: “ Initial reports are of widespread devastation. We have lost all what money can buy and replace.”

In the light of day, the island was stunned, but not paralyzed. Immediately, the islanders set about the long task of recovery. As news coverage soon noted, Dominica’s citizens are a naturally resilient people, accustomed to setbacks, possessing an unshakable sense of humor even in the face of disaster. But it would be a long road back to even a semblance of the life they had known before the storm. 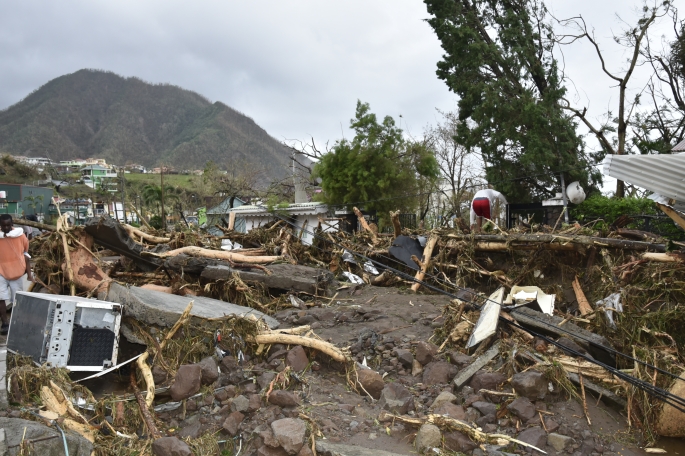 The strain of the island’s immediate need was best embodied by the Prime Minister’s appearance on a local news station in neighboring Antigua on September 21. Describing Maria’s passage, Skerrit sketched a scene from the apocalypse. “ Our country has been devastated. We have never seen such destruction.” Dominica was without running water. Cell phone towers were down, electric power just a memory. Every structure island-wide was damaged. Nurses at the compromised hospital in Roseau had been working nonstop for ninety-six hours under impossible conditions. A dialysis patient had walked from Portsmouth to Roseau, twenty-four miles through wreckage, only to find dialysis machines inoperable. Many people were now homeless. Residents in neighboring communities were cut off from one another, unable to locate loved ones. Already the first storm victims had been laid to rest, buried quickly in the tropical heat. Search and rescue was now the main preoccupation of first responders across the island.  When asked about the immediate needs of his countrymen, the Prime Minister dropped his head for a moment, wiping away tears. 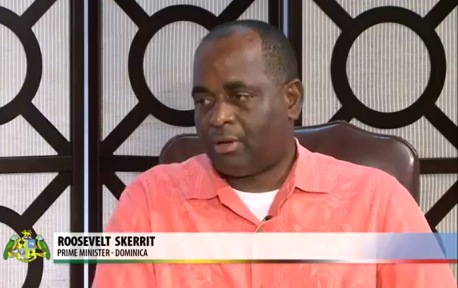 Quickly collecting his thoughts, Skerrit outlined a plan for immediate recovery, declaring that Dominica could bounce back. He announced that he would be traveling to New York the next day to appeal to the UN for immediate aid. The island had not yet healed from the ravages of 2015’s Tropical Storm Ericka. Recovery post-Maria would now be a long and much more difficult journey. Every village was in immediate need of water. Entire communities would have to be abandoned and rebuilt. Cell phone and internet services must be restored so that communication could resume.  In closing, Skerrit stated:

Unfortunately, we have to wait for an Irma or Maria to understand what I have been saying for a long time. We need access to resources to build more resilient societies and countries. The extent of the resources necessary is beyond us.

Meanwhile, world news had moved on. Maria had smashed the US Territory of Puerto Rico to pieces. Texas and Florida had barely begun the cleanup post-Irma. The blood of innocents flowed in the streets of the Vegas strip. The United States was embroiled in the greatest political rift in living memory, a divide gobbling up every spare moment of news time. California was on fire, with hundreds of residents missing and dead. North Korea was threatening to incinerate millions more. People everywhere were shutting down, unable to absorb the next day’s catastrophe.

Through it all, I remained focused on Dominica, watching and waiting, blocking out all other news. In a world unhinged, the suffering of this one island Eden– a place I was yet to visit– had somehow changed the course of my life.

On the morning after impact, the island emerged, totally present, in my conscious mind, just as its volcanoes had risen from the deep eons earlier. I realized at that moment that I could not let Dominica’s story fade into the endless roll call of disasters. I could not turn away.

2 thoughts on ““We Have Never Seen Such Destruction””